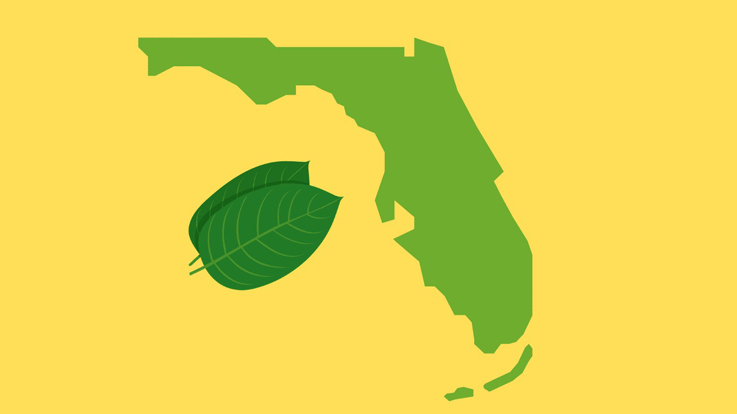 Kratom, a leaf from the Mitragyna Speciosa tree, is legal in the majority of states in the US. While this article focuses on kratom legality in the state of Florida, it’s very important you check with your local cities for any ordinances regarding kratom. For example, in January of 2014 Sarasota County passed an ordinance which made it illegal to buy, sell, use, or possess kratom. The ordinance designated kratom as a “designer drug” which would fall under that same category as bath salts or spice. The penalty? A misdemeanor that can land you 60 days in jail and/or up-to a $500 fine. There was a petition organized by the Botanical Legal Defense on Change.org but failed to make a difference.

With that out of the way, let’s move on and answer the main reason you’re here. Is kratom legal in Florida?

Florida, also known as the Sunshine state, and responsible for “Florida Man” stories, serves as the 4th largest state by population (and growing). If you’re a kratom enthusiast, being up to date with kratom laws should top the list.

Let’s start off by answering what you came here for: Is kratom legal in Florida? YES. As of the writing of this article, kratom buying, selling, possessing, and using is LEGAL in the state of Florida – EXCEPT for Sarasota County which banned kratom entirely.

Now that the major question has been answered, those of you who are frequent kratom users will most likely close this article and move on, but wait there’s more!

Earlier this year Florida Senate Bill 1076 was introduced that would ban the sale of kratom to users under the age of 21. The attempted law would have also included a measure that states “prohibit processors from selling, preparing, distributing, or exposing for sale certain kratom products.”

Violators would have been subject to a fine starting at $500 and increasing for each offense. This was introduced by Sen. Joe Gruters, R-Sarasota. He states: “As long as it’s safe and as long as it’s marketed for what it is, I think people should have access and have the availability,” Gruters said. “We just want to eliminate the bad actors, and those people that are turning the product into something that it’s not.” As of writing this article, SB 1076 has been “Indefinitely postponed and withdrawn from consideration” as of 3/12/22 according to The Florida Senate website (1).

It’s important to do your research for reputable legal kratom vendors. If you are in the Brandenton, Tampa, St.Pete area, (or looking for a reliable, trustworthy, and high quality kratom store in Florida) scroll down to the bottom of this page to learn more about Centuries Harvest.

However, if you are new to kratom, this is probably the first stop in your journey to figuring out if it’s right for you. I’ll touch on some high level information so you’ll have a better understanding of what kratom is and some things to look for when shopping around.

But before I get into that, let’s go over something I mentioned at the start of this article.

Kratom is illegal and banned in Sarasota County Florida.

I’m writing this section for the reminder that while kratom is legal in the rest of Florida, it is a misdemeanor crime in the cities of Sarasota, North Point, and Venice. This also includes the surrounding towns and unincorporated areas within Sarasota county. How did that come to be exactly? Well in January of 2014 there was a flurry of misinformation about kratom, which brought into question its legality, uses, and harmfulness that reached the local Sarasota government.

After the discussion, an ordinance was passed that labeled kratom as a “designer drug.” For those who don’t know, designer drugs are made to mimic the effects of the original drug, while avoiding the illegal label or detection with standard drug tests. Like bath salts, or synthetic marijuana. Purchasing kratom from a reputable store will have products that are sourced from pure and natural manufacturers. Be sure to ask questions and gauge the expertise of the staff to feel comfortable when making the purchase. Kratom is a leaf on a tree after all and when harvested properly it’s probably the furthest thing from a designer drug.

Back to the details, if you were caught possessing, purchasing, selling, or using kratom in Sarasota, here is what you can expect. A fine up to $500 and/or 60 days in county jail. While there was an attempt to overturn this ordinance, a change.org petition, it wasn’t enough to make a difference. Kratom is still banned as of the writing of this article.

What makes kratom so unique?

The kratom industry is filled with misinformation and bad players. Kratom is derived from the Mitragyna Speciosa tree located in southeast Asia. As this leaf ages, the veins of the leaf will change color thus changing its effect. The leaves are normally ground into a fine powder which you can use to mix into teas, or cut and packaged into capsules.

Starting off with the red vein kratom strain, it’s known as the relaxing strain. Had a long day? Need something to help decompress? Consider choosing a red strain product.

Or maybe you need the opposite and are feeling unmotivated and need help generating some energy. Consider purchasing a white vein kratom product like the bali kratom powder.

As for the last major and most popular vein – the green strain – you probably guessed it already, it’s a balance of the white and red veins. It can help keep you grounded while providing energy to get you through the day.

The benefits of kratom have helped many users manage aches and get through tough times in their lives. It’s shameful that the local Sarasota government has a county kratom ban.The opioid crisis is still alive and well in FL and independent studies have shown kratom as a treatment for withdrawal symptoms for those who struggle with substance abuse and opioid addiction.

However, it must be stated that the US Food and Drug Association has not approved kratom for this use and cautions those who use it as a health safety hazard.

Where to buy kratom in Manatee County Florida?

If you’re looking for a reputable store that prides itself on providing natural kratom free of contaminants and synthetics visit Centuries Harvest in Manatee County at 3207 Manatee Avenue W. Bradenton, FL, 34205. They offer a wide range of kratom veins and blends to suit your particular needs.

Centuries Harvest also provides great resources on kratom and how it can help with managing certain aspects of your health like aches. Be sure to also sign up to their mailing address for a 15% off coupon on your first purchase!